This is a guest contribution from Thai Nguyen of Wantrepreneur Journey. 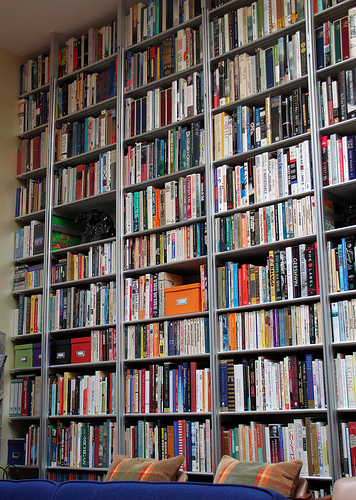 You are getting sleepy…very sleepy…

That’s typically what comes to mind when you think of hypnosis—a stage show with some unfortunate soul doing the chicken-dance. However, those who practice hypnosis are quick to give a proper explanation.

Here’s the textbook definition: The induction of a state of consciousness in which a person becomes highly responsive to suggestion or direction.

We enter into hypnotic states on a daily basis; completely absorbed in an activity and losing track of time. It happens when you drive, when you watch movies, and—when you read.

Hypnosis feeds off the psychosomatic power of words. An intriguing study in Malcolm Gladwell’s Blink highlights the mind-body relationship inherent in words. Subjects were lead into a room, asked to describe how they felt. Then, they were told to read a list of words: “worried,” “Florida,” “old,” “lonely,” “grey,” “sentimental,” “bingo,” “withdraw,” “forgetful,” “retired,” “wrinkle.”

Afterward, subjects not only described feeling slow and sluggish, but physically walked out of the room slower than when they entered. In psychology, it’s referred to as Priming, in hypnosis it’s synonymous with “embedding a command.”

This fascinating link between words and physiology is often exploited by the advertising and marketing industries. Words are carefully crafted to evoke powerful emotions and a state of higher suggestibility.

Exploitation occurs because something is so effective. That effectiveness can certainly be applied to the article you’re about to write.

As you write, here are five hypnotic strategies to put into place:

Ever wondered why Shakespeare’s work is so mesmerising? He uses iambic pentameter heavily throughout his plays and sonnets. Pentameters indicate the rhythm of spoken words; iambic being the most common in English poetry. The rhythm of poetry captures us, and can be applied to writing.

Think of the da-DUM rhythm of the heartbeat and the tic-TOCK of a clock. The unstressed syllable followed by the stressed syllable is the iambic pentameter. It’s not only our feet, but also our minds that cannot help tapping to the beat. Here’s the first line of Shakespeare’s 12th Sonnet:

Let’s be clear, this isn’t a challenge to try and turn all your articles in poetic pieces, but if you are able to bring more of a rhythmic and poetic flow to your writing, you’ll certainly be more engaging.

Research and academic writing is general done with the passive voice—hence they’re so tedious to read. The focus is always placed on object—the evidence, findings, and results, rather than the subject—the person doing the research.  Hypnotic writing is all about the subject; always use the present active voice when structuring your subject and verbs.  The “now” engages people much more than the past or future.

Notice the difference between:

The brakes were slammed on by Stacey at the red lights.

Stacey slammed on the brakes at the red lights.

Everybody loves movies. Great stories are universal across all cultures because they allow for human empathy. When you share a personal story or experience in your articles, people respond with, “Oh yeah, I remember when that happened to me!” Or they can at least imagine what that’d be like.

A story brings you into a different setting. You’re suddenly detached from sitting on a chair and looking at your laptop to immersed in the scenario presented. Studies show that when we engage our imagination, the lines between what’s mentally constructed and what is real gets very blurry. A person who imagines practicing piano experiences similar neurological effect as one who physically does.

Use stories in your writing to activate your reader’s imagination and immerse them into hypnotic experience. Simply starting off a sentence with “Imagine…” will get the ball rolling.

“You” makes readers feel as though your article is directly speaking to them. Although you’re writing articles in hope of having it read by millions, you certainly don’t want to sound that broard and generalised. That create a canyon of disconnect. You want to sound as though you’re having a personal one-on-one conversation with your reader.

There’s a psychological principle called the Fundamental Attribution Error—you’ll be furious and disgusted when you see someone texting and driving, but oh-so forgiving as you drive and text away. Our critical factors are on high alert when we analyse others, but take a break when we analyse ourselves.

If you write as though addressing a broad audience, you’ll have to fight through the critical factor, the more you are able to be personal, the more engaged your uncritical reader will be.

“Because” is your key word here. Humans have curiosity hardwired into us, we’re always searching for answers and justification. Addressing problems and creating curiosity in your writing is crucial, but even more so is providing a resolution and explanation.

The classic “Xerox copy” study by Harvard psychologist Ellen Langer demonstrated the power of simply giving an explanation. The set-up was a student attempting to cut in line for the copier:

In the first scenario, she asked “Excuse me, I have five pages. May I use the Xerox machine?” 60% allowed her to cut-in line.

The second scenario was more specific and asked, “Excuse me, I have five pages. May I use the Xerox machine because I’m in a rush?” The numbers shot up to 94%.

The third scenario is the most surprising: “Excuse me, I have five pages. May I use the Xerox machine because I have to make some copies?” The numbers stayed about the same at 93% even with a redundant and ridiculous explanation.

A well written and hypnotic lead-in will create enough momentum for the reader to come to a climactic “Why?” But as the study shows, we’re profoundly responsive to explanations, and not presenting an explanation is like switching off a movie before the big ending.

The power of words to evoke positive change motivates Thai to write. Previously a professional chef and international athlete, he’s now somewhere in the world with a backpack, MacBook, and a story to share. You can follow his work at The Utopian Life, Facebook or Twitter.

Originally at: Blog Tips at ProBlogger

Hypnotic Writing | 5 Effective Strategies To Put Your Reader In A Trance.

SEO is dead – What’s in the Commonly Prevailing Myths in SEO Industry?

44% of Opera Mini users in India are on Android; Shopping...

admin - September 30, 2014 0
Once known as a browser for feature phones, 47% of Opera Mini users in India are now on smartphones, according to the company’s State...

Am I Having a Stroke? 7 Signs of Stroke You Might...

Top Reasons Why Business Should Go For a Custom Mobile App...

The 23 Best Ways to Quit Smoking

Are You In Or Out? Internal vs. External Motivation Battle