There are times when you’re working on multiple tasks in parallel. For example, I have been recently working on reviewing lightweight web browsers for Linux and researching on Smart Credit Cards besides doing my regular work. Although I use different workspaces for different tasks, the problem that I usually face is that the app icons pinned to the Unity Launcher bar (I use Ubuntu 14.04) remain the same across all workspaces.

I was looking for a way to customize the launcher so that it only contains those apps that are required for the workspace which is currently active. In this article I will share with you how I solved this very problem using a software called Unity LauncherSwitcher.

The official documentation of the tool describes it as a background script which enables you to set up a different launcher on each of your workspaces in Unity. It makes the Unity Launcher remember the contents corresponding to a specific workspace and changes the Launcher automatically when the user switches to another workspace.

Use the following commands to download and install Unity LauncherSwitcher:

Once done, just head to Dash and search for Unity LauncherSwitcher, and you should find it there: 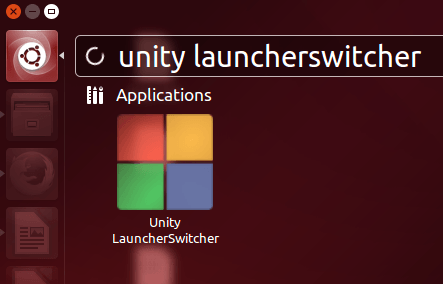 How to Use Unity LauncherSwitcher

Using the tool is very easy – just open it by clicking the icon that appears in your Dash search, and you should see the following window: 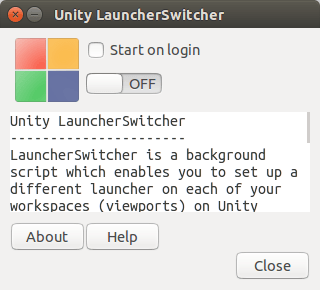 As you can see in the image above, there are only a couple of options that the software offers. One is, of course, to enable and disable it (ON/OFF) while the other allows you to automatically enable it on system login. By default, the tool is turned off, so you need to turn it on using the slider: 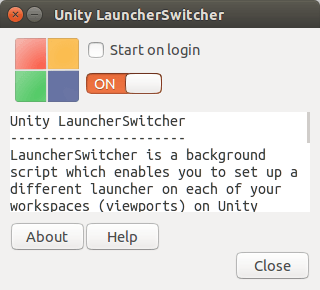 If you’re not used to working with multiple workspaces but would like to now, the next step would be to enable multiple workspaces, something which you can easily do by heading to “System Settings -> Appearance -> Behavior” on your Ubuntu box, and selecting the “Enable workspaces” option.

Now the tool is ready to use – you can try it out by removing or adding an app icon from the launcher in a workspace and confirming that the change is limited to that workspace only. For example, I removed the gThumb editor icon from one of my workspaces,

and as expected, the icon was present in all the other workspaces (one of them is shown in image below). 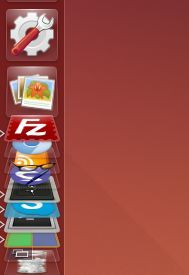 An important point worth mentioning here is that if the tool is switched off while being used, launchers in all workspaces are set with app icons that are there on the currently used one. However, when you restart the tool, the previous settings are again applied.

Note: you can also enable/disable the tool from the command line using the following command:

Unity LauncherSwitcher is not only extremely useful, it also has a very low learning curve – it’s probably one of the simplest Linux tools that I’ve come across recently. If you want to use your Ubuntu workspaces more effectively, you should definitely give this software a try.

Previous story :Need Help Creating A Photography Site With WordPress? Use These Tools!

How to Display Data as Table in Browser Console

Console is a browser built-in tool that logs errors that happens on the website. If there are any errors – such as broken links, incomplete JavaScript functions, or unknown CSS properties – the browsers will show error messages within the Console. On top of that, we can also interact wit

What do you do when your design pattern breaks down?

Say you have a module. Every site has modules, right? <div class="module"> </div> Perfect! We did it! But now, a New Circumstance™ comes along. This module isn’t going to work exactly as is. It’s pretty close, but in this New Circumstance™ the module is going to n

How to Install and Configure vsftpd on Ubuntu 12.04 LTS

FTP (File Transfer Protocol) is probably the most popular method of uploading files to a server; a wide array of FTP servers, such as vsftpd, and clients exist for every platform. Pre-Flight Check These instructions are intended specifically for installing the vsfptd on Ubuntu 12.04 LTS. I’ll

Mark Otto takes us on a tour of the CSS of GitHub.com. So great to read a straight-talking bit like this, warts and all. This is 90% the same as we do things at CodePen. One major difference is that they combine all their CSS into two files and just serve them on all pages.

Are you new to CSS? This article is for you! Perhaps the biggest key to understanding CSS is understanding selectors. Selectors are what allows you to target specific HTML elements and apply style to them. Let’s not think about style right now though, let’s just focus on the selecting. I

Digital innovation puts us all in the software business

Guess what? You’re not in the business you think you’re in. I don’t mean this like one of those these-are-not-the-droids-you-are-looking-for Jedi mind-tricks but as a statement of fact. No matter what else you may do, if you rely on digital technology, and who doesn’t, then y

Instagram has a new standalone tool and in just two days it has captured the interest of various trend-savvy brands and made this writer waste an entire evening playing around with it. I think you’ll agree when you see the results below, that it was totally worth it. Hyperlapse is a standalone

Do you want to present visual messages in new ways? Are you looking for new design tools to help you create visual content? Social media is nothing without images. From simple blog graphics to memes and videos, visuals help us communicate with and engage our audiences. In this article I’ll sho

How Improving Another Blog will Help You Improve Yours

Today I want to challenge you to help another blogger to achieve their goals in some way – and I’ll explain in the podcast how it has a knock-on effect of helping you improve yours. There are many ways you can help another blogger along their path, and I outline quite a few in today&rsqu

While some may cringe at the word, we all know we need to be more agile. Econsultancy recently hosted a roundtable event on Digital Transformation. The following were five strategies put forward by attendees for becoming a more agile marketing organisation… Prototype Ash Roots of Direct Line G

In this week, this post published on Wednesday instead Friday like previous weeks. Because I decided to create a brand-new page to listing them, then this post is last post of the deal of the week series. I am always looking for opportunities to buy discounted products to support the development of

Yo guys! We are back with another leading discount coupon website which is Couponada.in. Technically, Couponada is a Poland-based International company. Since 2010, they have become leading experts in the field of discount coupons, promos and deal discovery. We wanted to thank the team members of Co

Snooze…snooze….snooze…. It’s been more than thrice that you have hit the snooze button. So stop hitting the snooze button and get on track for an active day ahead. As getting up early in the morning not only helps you to feel active all day long but also aids in increasing

In this day and age, who doesn’t love Photoshop? With it you can manipulate any picture you want, however you want. Add in, remove, trim a bit here and there; if you know how to use Photoshop, you know how to truly edit a photo. So it’s no surprise that it’s considered the Swiss Ar

Does your business use Instagram? Is there a place for time-lapse video in your marketing? It used to be that you needed expensive equipment to create time-lapse videos. Now you can create them with Instagram’s Hyperlapse app. In this article I’ll show you how businesses are using Hyperl

Healthcare services company DocSuggest is expanding beyond doctor appointment service to a health and personal care search and appointments service called Ziffi. The company claims that users can book appointments in salons, spas, diagnostic centers, doctors and hospitals through this new

Blame your brain for Feeling disappointed

Do you often wonder why you end up feeling disappointed? Well, don’t blame those around you; it’s your brain signalling that leads to disappointment, says a new study. Scientists revealed that disappointment is signalled by two neurotransmitters (glutamate and gamma-aminobutyric acid -GABA) th

Consumers are still adjusting to lockdowns, working from home, homeschooling, and everyday tasks like buying groceries, running errands and other activities. The same ways, companies are also facing a myriad of unknowns. The business has changed, but one thing the is certain is that customer engagem
Written by thetexting June 24, 2020June 24, 2020
Saving Bookmark this article Bookmarked

How to Prevent Conditioned Air from Escaping Out of Your Room?

Air conditioners are very simple to use these days because a single click is enough to control the indoor temperature. However, power consumption is still a matter of concern, even with modern air-conditioning systems. So, to avoid unnecessarily high power bills, you should try to minimize the power
Written by acrepairsoaklandpark June 23, 2020June 23, 2020
Saving Bookmark this article Bookmarked

Air conditioners can easily be at the top of the list if talking about important home appliances, especially during summers. It is because when the atmosphere becomes unbearably hot, an air conditioner seems to be the only relief that provides a pleasant temperature in our homes. On this note, there
Written by miamidadeair June 18, 2020June 18, 2020
Saving Bookmark this article Bookmarked

Do you know the temperature of our planet has increased at a brisk rate in the last few decades? This increasing temperature has made air-conditioning systems an integral part of our daily life. Today, the situation has come to this that many people find it difficult to survive without an air condit
Written by morgantaylorjoy June 18, 2020June 18, 2020
Saving Bookmark this article Bookmarked