It was the great Coco Chanel who once said, “Fashion changes, but style endures.” Well, regardless of your thoughts on the matter, there’s anothing thing that changes along with fashion. It is technology. With the amount of innovation happening these days, it kind of makes sense to bring the two together. After all, technology opens up so much more possibilities.

By combining style and functionality, there have been a few people who have taken fashion to the next level. From coats that can turn you into a mappable hotspot to dresses that will make you reconsider that little white lie, we’ve gathered a collection of 15 ongoing projects that could just be turned into reality.

We can’t say for certain if they’ll actually catch on but these futuristic fashion styles do look pretty awesome.

This coat is designed by an Austrian architecture company, Coop Himmelb(L)au and you can use it to disappear. Nope, it is not Harry Potter’s clock of insivibility. What happens is that the metallized fabrics block radio waves and makes the wearer untrackable from modern devices. It works great in a sense that your credit card information will be safe but this also means that you won’t be contactable via phone. 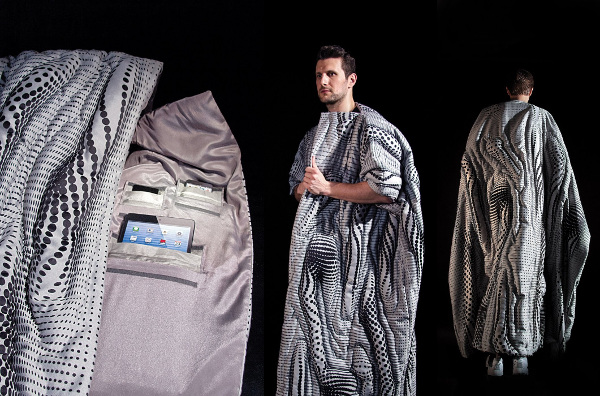 Since acid rain remains a threat to public health nowadays, the Korean-born, London-based designer Dahue Sun had invented a natural cabbage dyed dress that could act as a pH indicator when rain falls onto the fabric. To take it even further, it even comes with a smartphone app that allows people to scan and upload colour changes to a cloud based database. This will update the rest of the world with real-time environmental data about the rain. 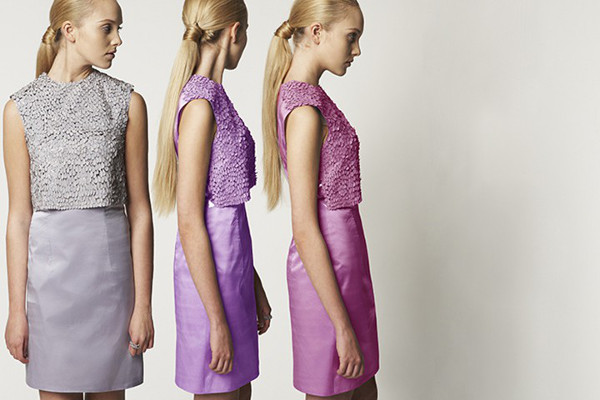 Designed by Borre Akkersdijk, a Dutch textile developer, this prototype is basically the opposite of the Jammer Coat because it is embedded with copper wires that enable WiFi, GPS, NFC and Bluetooth that will turn you into a mappable hotspot with MP3 streaming capabilities. All those wires won’t hurt though as there are two layers of cotton to protect the copper wires inside, thus making it comfortable to wear. 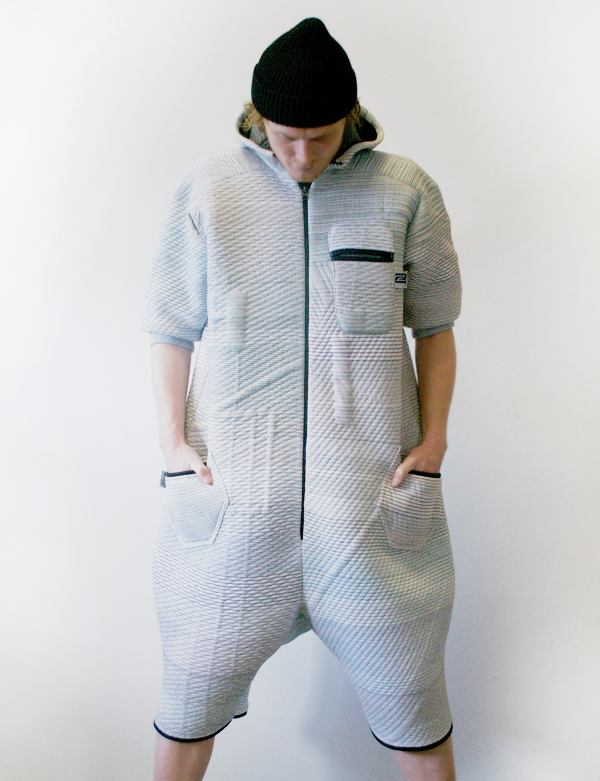 What if your energy could be harnessed and used to change the display of a specific fabric? A group of researchers at Concordia University in Montreal, Canada have managed to weave electronic components into pieces of fabric to do just that. The result is illustrated in the picture below and as you can see, it’s something really cool. They’re even looking at other applications for this fabric as well, such as for charging and medical purposes. As more research is being conducted, this won’t be in retail stores any time soon. 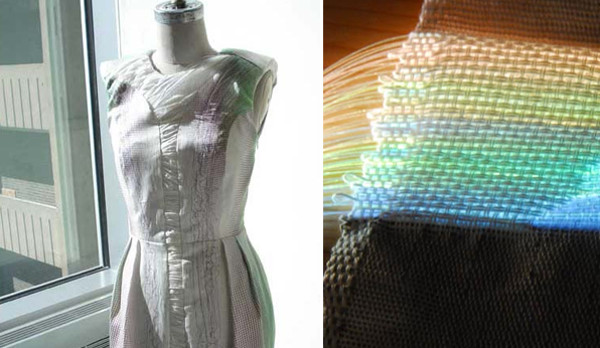 This dress knows when you are looking at it. Embedded with eye-tracking technology, the dress responds to the human gaze. Gazing at the dress activates tiny motors which moves certain parts of it. One of the dresses is covered in tendrils of photo-luminescent threads that dangle from ruched fabrics while the other one is made up of glow-in-the-dark threads which forms a base layer. 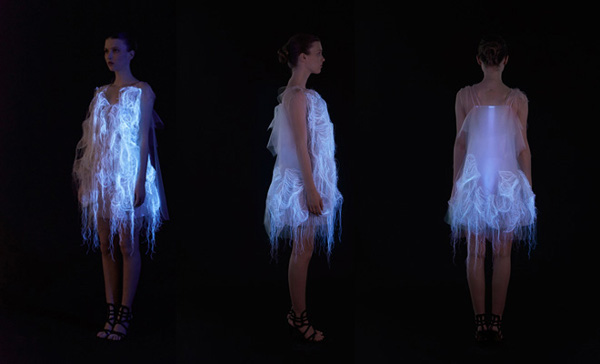 One look at the details of this dress and you can already tell just how provocative it’s meant to be. Throw some technology into the mix with opaque smart e-foils and the dress is taken to the next level. Oh did we mention that it becomes increasingly transparent when your heartbeat increases? This is one that makes a statement fashion wise and via its message of personal space too. 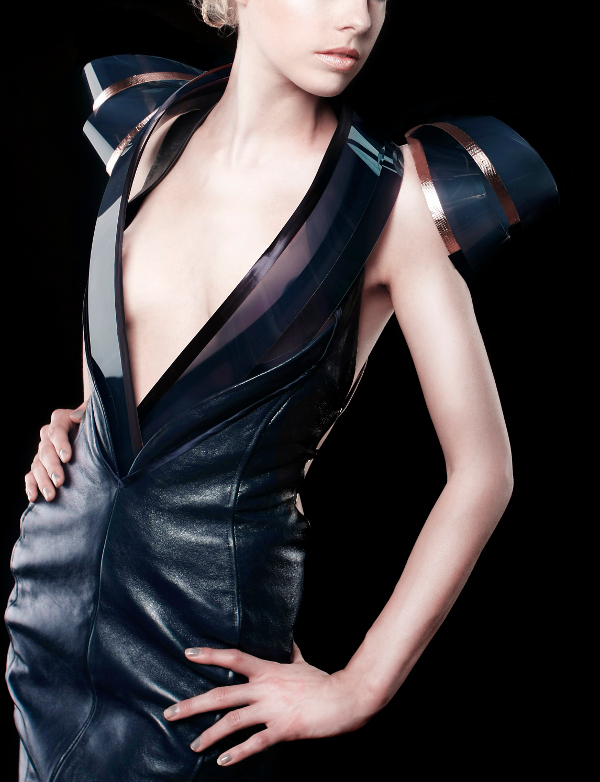 How about clothing that responds to the weather around you? This jacket is treated with liquid crystal to make it respond to friction. Lauren Bowker does this by combining textiles and ink technology. A gust of wind or a ray of sunshine would have an effect on this beautiful piece of clothing, as indicated by the picture below. 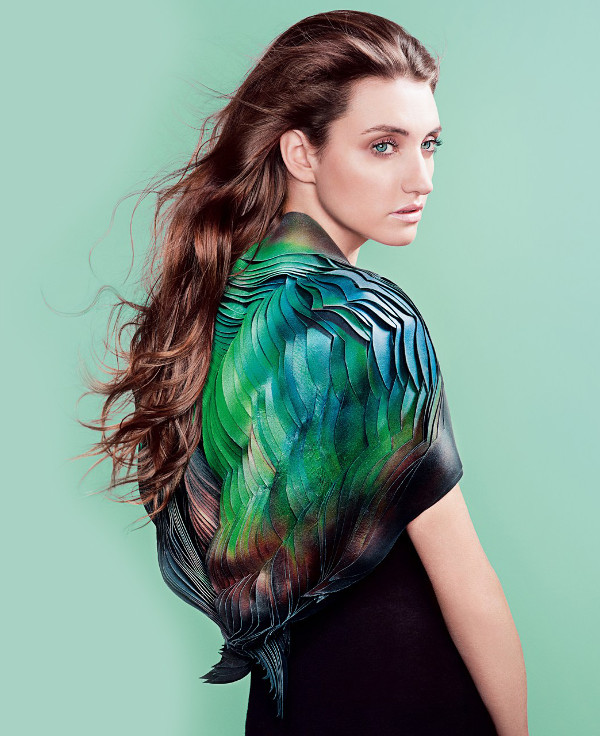 Ying Gao, the same Montreal fashion designer responsible for the Gaze Activated dresses, also created these dreses that look like they’re living and breathing. The folds of the dress curl and unfurl when exposed to light and the rate at which it moves changes with the light’s intensity as well. What’s great about this piece is how natural it moves. 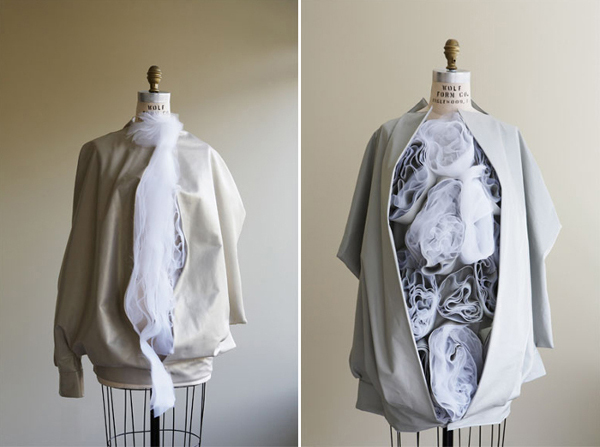 This is a handy one for the minimalists out there. Crystal solar panels are integrated into leather flaps on the jackets shoulders and waist so they can be revealed when there is sunshine and hidden when not in use. When worn in the full sun for an hour, it can store enough energy to charge a typical smartphone for up to 50% in capacity. 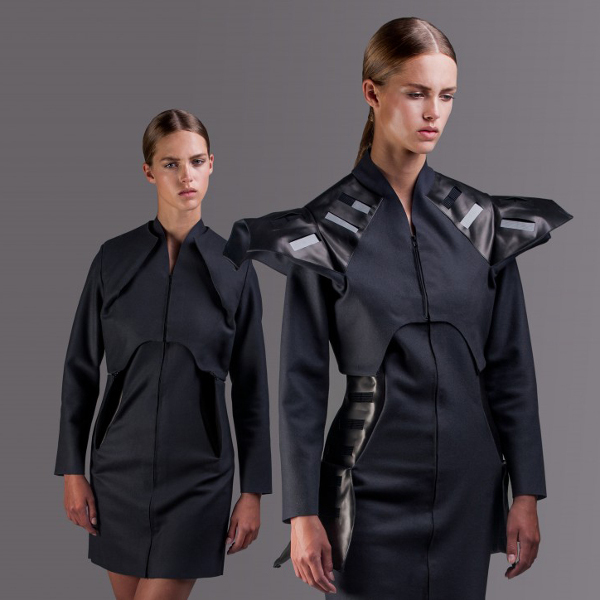 This prototype by Philips Design gives us a look into the future of fashion where clothes does not merely to protect, but also reflect our emotions making it a forward form of communication. The first layer of the dress contains biometric sensors which projects emotion which comes in the form of colorful lights onto the second layer, the outer textile. It is both stunning and functional. 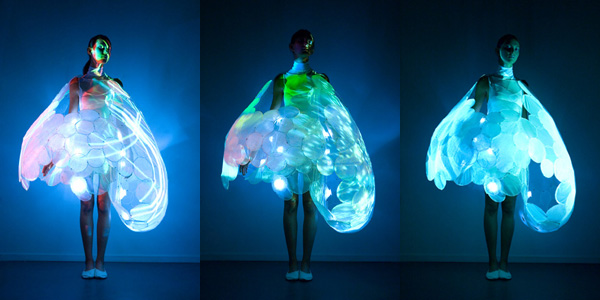 his garment punishes its wearer whenever a lie is told and is not invented for those who are weak in conscience. It has a speech recognition system, which constantly checks for lies. The dress will light up when you are talking, growing with intensity as the likeliness of a lie increases. If you have the guts to lie, it lights up and flickers while stunning you with an electric jolt as a repercussion. 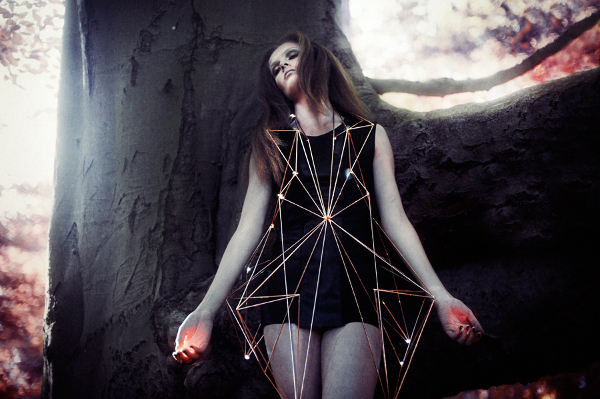 The name says it all really. Embedded with 62 LED lights that are sensitive to camera flashes, this dress lights up when it is photographed. This is a great way to remind the paparazzi who the real star is… the dress! 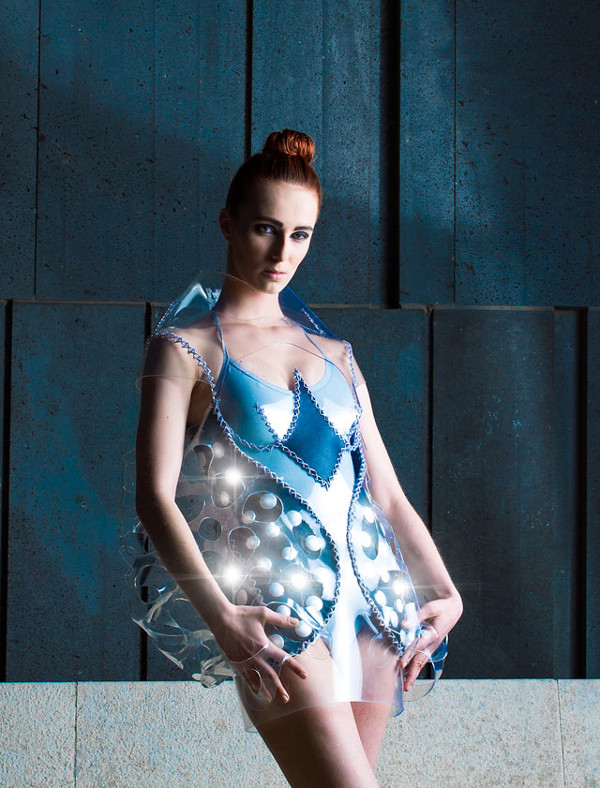 Compared to the rest of the dresses, this one rewards another person and not the wearer of the outfit. If you’re interested in a refreshing cocktail, all you’d have to is play a touch screen version of ‘Truth or Dare’ and a combination of medical technology, customized hardware and human temperament will ensure that you get that well-deserved drink. However, get too close and the dress shuts down on you. 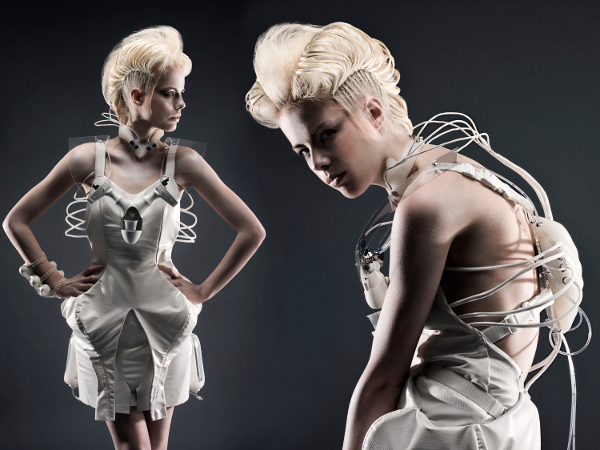 At first glance, this dress will intrigue you merely by the flirty sparks. In essence, it is operated by a micro-controller-based, battery-driven sensory system that can detect when people are near you and releases smoke if they invade your personal space. How’s that for a warning sign for people to stay away? 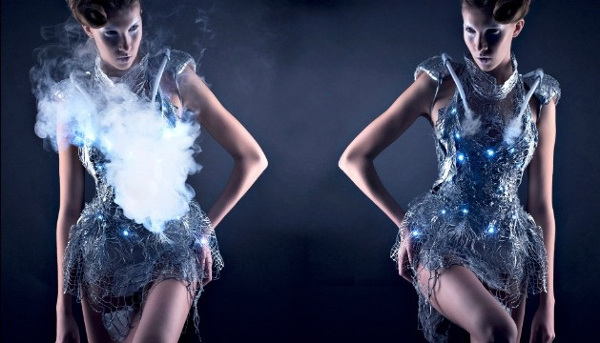 Combining robotics and fashion, this dress has 6 robotic legs perched on the shoulders which responds to nearby movements. This piece of fashion also deals with the theme of ‘personal space’. It attracts the attention of those who are curious whilst protecting the user wearing the garment at the same time. 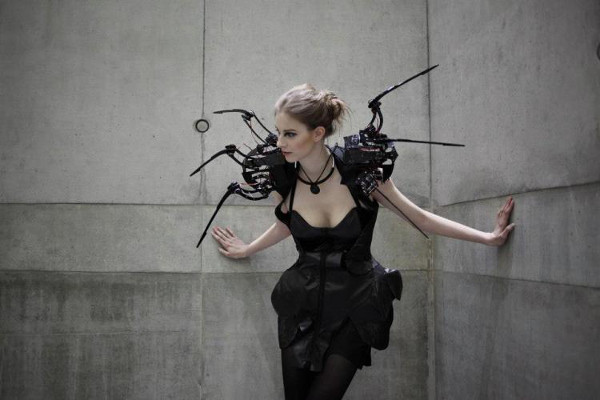 Easily Create a Screencast of Your Linux Desktop Using ScreenStudio

admin - September 18, 2014
0
Sometimes you might want to make a digital recording of your computer screen so as to demonstrate how to use a particular software, tweak...

Unlike Wear Pipe Can FOR NO REASON Be Too Large?Fire Sprinkler...

Tips for Web Designers to Make Your Clients Happy (It’s Not...

Working with Images in Stylesheets with PostCSS