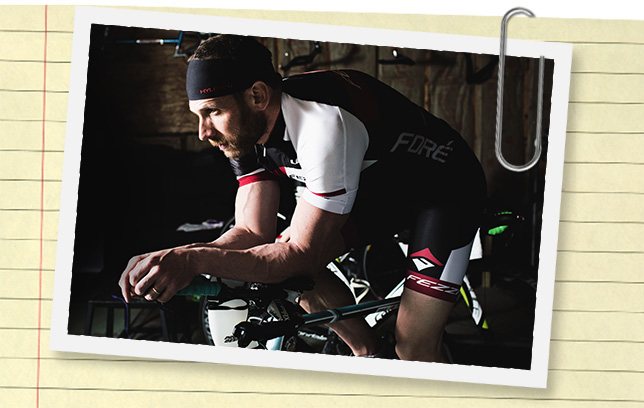 James Lawrence holds the world record for most Ironman races completed in one year, at 30. It’s a bonkers achievement–and he just shattered it.

Technically, the 38-year-old triathlon coach and personal trainer didn’t go down in history for the feat, because the 50 races were unofficial. Lawrence and his family plotted the courses.

So why the heck undergo such a beastly challenge if glory wasn’t the endgame? “For me, it’s not about the world record,” says Lawrence, who is one of the finalists for the 2015 Search for the Ultimate Men’s Health Guy. “It’s about impacting people’s lives.”

Lawrence ran to raise awareness and funds for a non-profit that combats childhood obesity. At the end of every running portion of his Ironmans, he invited supporters from around the U.S. to join him and run the final 5K of the race with him.

(Looking for a calorie-blasting physical challenge that will kick your butt–and get you in the absolute best shape of your life? Try The Anarchy Workout. One guy lost 18 pounds of pure fat in just 6 weeks!)

The marathon of mega-marathons kicked off June 6 at midnight in Kauai, Hawaii, and concluded July 25 in the native Utahan’s home state. Along the way, Lawrence raised $68,000.

“It was awesome,” says the man who biked 5,600 miles, ran 1,310 miles, and swam 120 miles in 50 days. “We had a lot of people that didn’t think we could do it, and we just charged through and did it. You have to stay positive to survive something like that. It came down to having a fantastic team that kept me on my toes and kept things light and made it fun.”

roberthans - February 24, 2017 0
How we work today has changed. We engage with customers, partners and employees in more industries and channels than ever before, from web, mobile,...

The Best FTP Clients (Free and Paid) for Your Mac

How to Install and Play Old DOS Games in Windows

Hyperlapse Lets You Selfielapse: This Week in Social Media

Productive ways of spending your vacation